This is a frame I bought off a friend for £25 including rear shock (Fox VanRC) when I told him I wanted a project…. 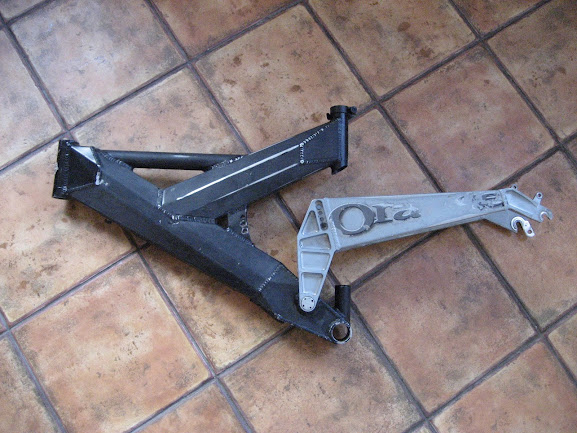 Upon telling a friend, he said “no way…that’s my old frame…I still have the forks for that!” to which I asked him how much…. “£25?”… Sold! To my delight it came attached to an old Hope c2 front brake.

So far frame + shock (apparently the good one! I am a hardtail rider so totally new to all this) + forks + front brake (no disc) = £50

I put the forks on my hardtail as an experiment as the frame is warrantied up to 200mm travel…it was horrid just in case you wondered! See the photo below… 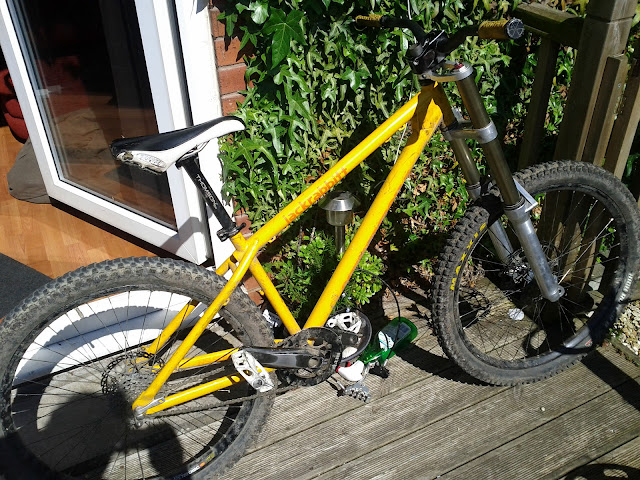 After I got the forks I replaced the seals (£10), after that I moved house 4 times and nothing got done (and in the process the rear swingarm got crushed [booo]) for about 3 years…until this year. A friend who works locally offered to blast and powder coat the frame, for nowt, legend of a guy that I have helped down at the local dryslope for a few years. After a few weeks, he told me it was ready to pick up…uber excited!

…and here is what was in the box… 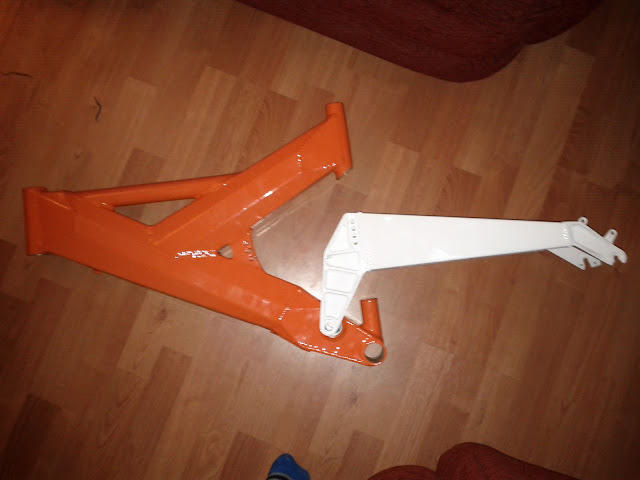 …as soon as I could I put the parts that I had in place…remembering that along the years of having it, I lent the front brake to someone and it never came back! Gutted…then I gave my brother a frame…and he produced a Hope c2 brake that he didn’t need anymore…how convenient!

This was only 3 weeks ago. 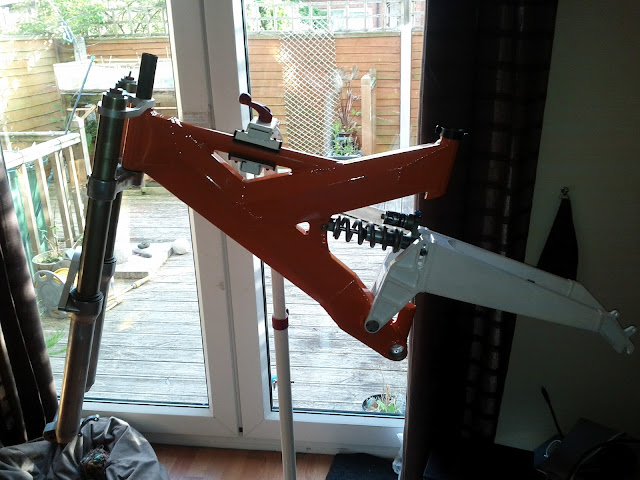 However in the process of messing about with things…I may have broken the rebound adjuster….or something…as none of the twiddly bits do anything any more! I need to find a service manual or something!

I used to work in a bike shop, so know the lads in there quite well, and when I told one of them (actually the guy that sold me it now that I think about it) that I was finally getting round to building it up, he handed me his old and fairly knackered saint cranks, dmr v12 pedals, and bottom bracket. Winner!

After helping a friend build up his new OnOne inbred, he no longer had use for his 31.6 seat clamp. Win.

Trying to help a friend sell his 2nd bike to make way for a baby…when I went round he was having a clear out of parts…”you got a seat for that heavy piece of metal you are building?”…. “no”….hands me an old school DH seat…yet another win!

Notice 2 things: 1) it pays to be nice and helpful to people, 2) more importantly…have awesome friends

after getting this far…. “I need to ride it!”

so I set about stripping my current bike OnOne summer season, of all it’s essential parts. Bars, stem, brakes, gears and wheels… 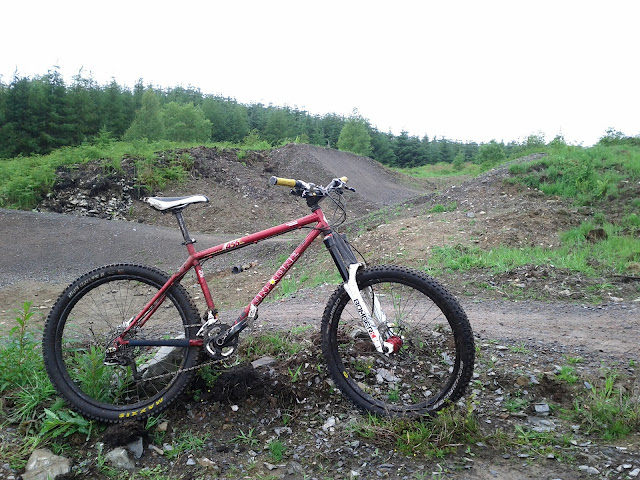 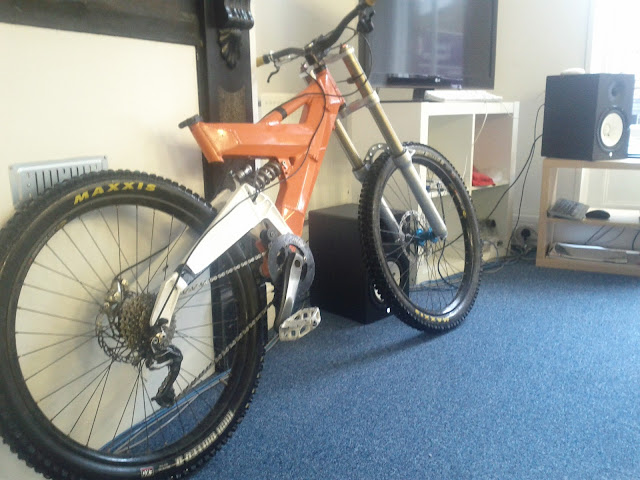 After 2 commutes to work on it…I decided it was time to test it out for it’s original purpose…so I fine tuned and tightened. Only to realise that the hole I used for the shock was forcing the reservoir to hit the frame….I told you I was new to this! I rubbed some paint off…ruining my shiny new paint job.

I organised a ride to take this piece of solid iron out for a ride…only to remember that morning that I still didn’t have a seat post…a quick bell to a friend and I had a 31.6 seatpost…albeit too long (and rushed…I put the seat on backwards) 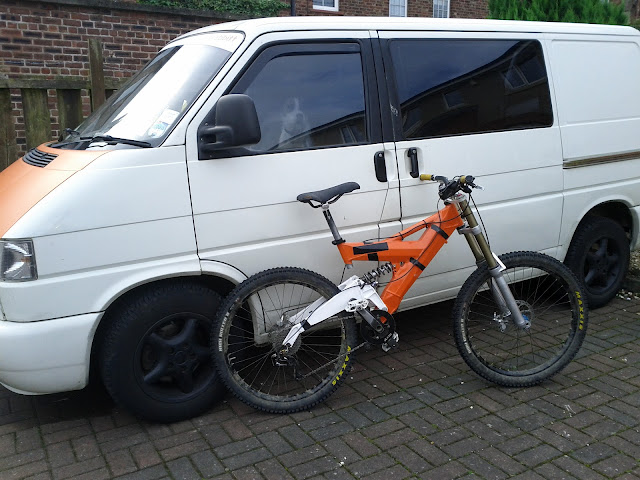 First ride out…went to Ae forest…an old favourite for playing on…and very much to my suprise, the bike handled everything I could throw at it…effectively laughing in my face about the doubts I had. So much fun to ride, responsive and comfortable…I couldn’t believe this was an 11 year old bike!

I ended up getting so confident that I did the 5 foot road gap on the Shredder. I was expecting to be slowly rolling over the jumps…so much so that I even took the work stand and OnOne frame with me so that if the MrO broke…I could still ride! 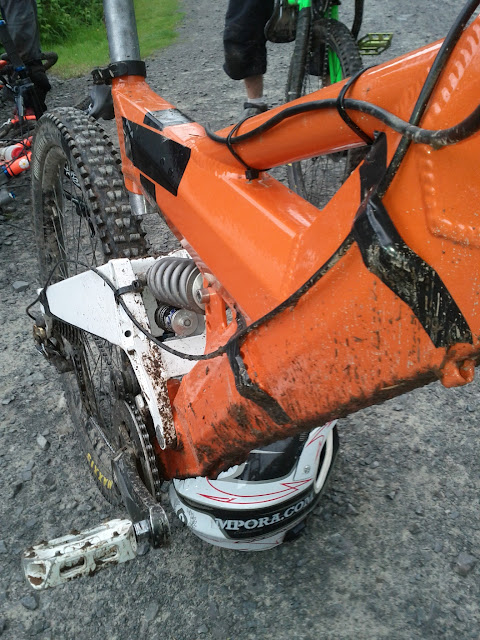