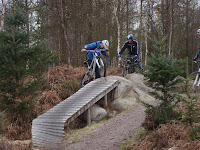 Dalbeattie red route was never one of my favourite stanes, just because there was no real, mind blowing descents. However this trip has changed my mind slightly, thanks to Mad Mike and Grave Danger, two names that I probably shouldn’t have tried to keep up with! 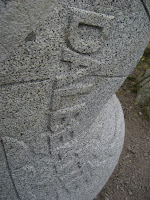 My lovely Marzocchi 55 ATA (2008)s were still back with Windwave, so Proudy kindly lent me his Trek Remedy 8. Let me just state this before I get into it all, I am, always have and always will be a hard tail person, and at the start of this ride I was 15% for full suspension and 85% for hard tail. 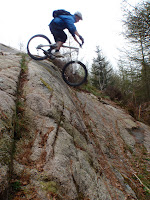 Anyway seeing as there were only 3 of us, we decided to really try and go for it, see if we could get round in a respectable time. We set off on the skills loop, which I will quickly add, is a pretty fantastic loop in itself just for having a play on. We discovered a little bit of black that we hadn’t seen before as you can see in the photo, it was a mini slab type thing with a sudden drop which was actually more scary for me than the actual slab. 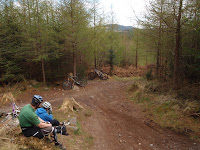 This is possibly due to me only riding the Trek about 500 metres to this point and not being used to the incredibly wide bars that Proudy had decided to attach. My arms were nearly out at full reach just to reach the grips! Needless to say I like my bars slightly thinner, but I did notice how the front wheel always pointed the direction I told it to with no rocks persuading it otherwise unlike with thinner bars. 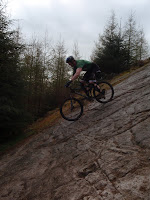 We did the first bit all the way to the stane (me lagging somewhat due to the fitness of the other two lads) pretty easily, I remember walking up that fireroad the first time I went…shocking! For me, the single track from the stane, for the next mile or so is the some of the best that Dalbeattie has to offer. I somehow found it in me to just keep pedalling and chasing Grave Danger down the hills, and I was starting to see the attraction of the fully squishy bike, it allows you to not think about the little bits of the track and just worry about the main line you want to take. The three of us just kept on pushing and pushing, and with Mad Mike behind me I didn’t want to lose face and slow down, so I maintained a pretty quick average speed, only later to hear him say he was only trying to keep up! If I knew that, I would probably have rested! 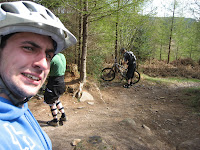 Did the slab first time with a little bit of hesitation of getting over the lip to start it, then the Twins as well, by this point I had retracted previous statements about Dalbeattie not being that good, as I now ranked it quite high. It is one for the fitter more experienced riders in my opinion though as you need to be able to keep on slogging, as the stopping to rest really splits the route up and makes it a lot less enjoyable. It is a pretty long trail and if I am totally honest, I would say more perfectly suited for the front and back suspension bikes, as some of the climbs are just that little bit too bumpy.

The last few sections with the northshore on top of the slick rock and then the very last bit of singletrack through to the car park are fantastic and really leave you wanting more. After really learning how to pre load the rear suspension for the jumps I was really starting to enjoy the Trek and a small piece of me would like to own one someday, but I am still a hard tail boy at heart. The stats of the ride can be found here and the photos are over here.