A good nights sleep and some bacon, some lovely sunshine and the welsh hills… a bit of a better start than the day before! Packing up the tent, getting 10 bikes out of 2 cars, repacking the cars with everything else and then heading down to the start of the Twrch Trail, all done quickly and efficiently. The sun shone all day and really helped make up for the amount of rain we suffered in the 2 previous days!

It was my idea to do the red route, and even though a few people said that I was daft, they appreciated me suggesting it by the end of the ride! I feel like I achieve more when I complete a full red loop, and even though we could have got the Uplift to the halfway point of the red loop and just ridden the good descents, I wanted to earn it, nothing better than that feeling of accomplishment after a hard challenge.

For anyone that has done the trail you will know just how challenging the 1st half is, very rooty, steep and technical. It just seems to go on and upwards forever, I think it feels longer due to the roots, possibly making this trail a little easier for the full suspension bikes, but don’t hold me to that one! The weather was nice and the scenery is beautiful but it also helps that the trail is well maintained and even after all the rain previous it was relatively water free!

We got to some of the climbs where people would have made a wrong move and had to walk a little bit, but everyone was full of encouragement for the next person trying it, which really helped me, it made me want to push that bit harder and make it to the top of the section. There is a lot to be said for words of praise and encouragement whilst on a trail, I know it might not be everyone’s cup of tea but I know it helps me a lot. It is so easy to knock someone down, but it is just as easy to build someone up, even something as small as a hi-five is enough to make someone feel accomplished!

This is what mountain biking is all about to me, being out with your friends in amazing surroundings, out on an adventure just for the sake of it! I am not saying that a little competition ain’t fun, but maybe sometimes we get a little bit too competitive for the circumstances. This is one I am sometimes guilty of.

Coming down from the freeride park, there are a couple of lovely sections that are quite natural, twisty turny and rooty, and if you take them at speed it feels so incredibly fast…it’s probably not…but it definitely feels like it! Then there is a section where we got told by a local, not to touch the brakes all the way round. Which I had tried the last two times I rode this trail, and failed…but today I managed it, and also got my fastest time on the GPS tracking on my HTC Tattoo. Last climb, then the best bits of mountain biking all over again! The rocky descent and the smooth, beautiful single track down to the car park. 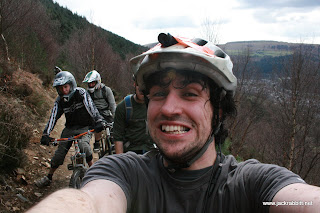 I was still on a massive rush about ten minutes later from it all, and I had finally remembered why I do these things. There is nothing better than pinning your bike down a lovely winding section of single track following your mates so close that it could all end in tears, so fast that there doesn’t seem like enough time to think, let alone react, so amazing that at the end you are all talking over the top of each other about how awesome it was…That to me is what it is all about. Thanks to all the lads for an amazing trip away, and thanks to the lads for reminding me who I am. 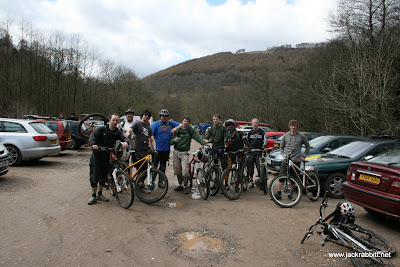 See all the photos here.